Littlestown Foundry’s strategy to compete with foreign competition is simple—invest in itself, specifically by installing two new automatic matchplate molding lines. “We were losing business to offshore competitors and we felt we needed something to give us an edge on the competition,” said Larry Smeltzer, vice president of operations at Littlestown Foundry.

That edge appeared in the form of two Disa GFD Match 130 molding machines (with a 20 x 24 in. flask size) that feature auto coresetting and electromagnetic pouring. One machine was installed in March 2001, along with a new melting operation, and the second in July 2002. “These were the first machines of their type for aluminum casting,” Smeltzer said. “We worked with Disa, field testing the equipment so that it would not only suit us, but future foundries.” The firm also has one Roberts Sinto FBM molding line with a 14 x 19 in. flask size, which was installed in 1996.

The new matchplate installation entailed removing older matchplate molding machines and putting in a fully integrated production system. While start up and full implementation took over a year, Littlestown was able to streamline its production line, eliminating mold handling delays.

The new molding lines have substantially increased the speed of production. “Mold production has increased by 35% because the machines are faster and the repeatability is excellent,” Smeltzer said. “We have been able to virtually eliminate mold shift, due to the positive flask alignment and mold stripping design, along with crush and sand inclusions that are normally associated with shift.”

When the new molding lines blow molds, the cope and drag squeeze heads are positioned in the flask to a predetermined dimension. The entire flask and squeeze assembly rotates 90º for the blow slots of the cope and drag to directly align to the blow chamber. The blow and squeeze takes place (with a pressure of 5-7 Bar) and the assembly again rotates 90º for pattern stripping.

One aspect of the new molding lines that has been critical in reducing manpower and in casting consistency was the addition of the automatic coresetter, which also speeds up the molding process by 30 molds per hour. “We insisted on it early on, and it’s as good as any coresetter that we’ve ever seen,” Smeltzer said. The coresetter enables the operator to insert multiple small cores into a mask on the coresetter arm.

At the appropriate time in the cycle, it moves into the machine and places the cores in the mold. Typical core setting times is about 5-8 sec of cycle delay per mold, compared to 12-15 sec when set manually. “We have jobs with as many as 18 complicated cores, and we can maintain 120 molds per hour. We also have four to seven job changes per shift and we maintain production of more than 90% per shift.”

The molding system is designed so that after the molds are produced, they are pushed from the machine to a mold handler, which automatically places weights and jackets on the mold. The molds then advance automatically to an electromagnetic pump pouring system. 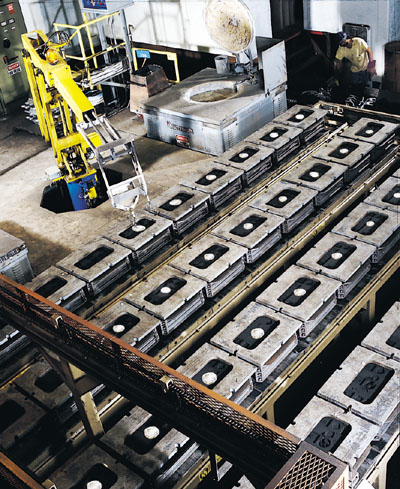 After the molds are produced on the molding system, they are pushed from the machine to a mold handler, which places weights and jackets on the mold. The molds then advance automatically.

After approximately 25 min of cooling time, the molds are dumped onto a shakeout line that discharges the castings onto a conveyor and then into a water quench conveyor, where they are cooled and any loose sand is removed. From there, the castings are automatically conveyed to a second floor area where the gates and risers are removed and the castings are either placed into overhead bins for grinding or dispensed to the trim die operation. “The trim die reduces or, in some cases, eliminates the need for grinding on a number of our castings by eliminating the parting lines,” Smeltzer said.

While Littlestown was revamping its molding lines, it also took the opportunity to install a stack melter and two new holding furnaces have been installed with permanent degassing and filtering.

The new molding system has not only helped to improve the foundry’s bottom line, but has helped to keep the foundry clean of excess sand. “We do not have the sand spillage that we used to, and because the system is completely contained, there is less wear on the equipment,” Smeltzer said. “The entire system has reduced mechanical movement, so it requires less maintenance and replacement parts, thus reducing operating costs.”

The requirement for manpower also has been reduced. Each molding line is a one-man operation, with only eight people involved in the physical casting operation (previously 15), including supervision and material handling.

The new matchplate molding lines also are responsible for a reduction in scrap rates. Prior to the installation, Littlestown typically had a scrap range of approximately 4-5%. “The new molding lines have allowed us to reduce scrap through eliminating mold shift,” Smeltzer said.

While Littlestown isn’t planning on any immediate future additions to its molding lines, the firm does hope to make additions in other areas. “We are planning on adding a new heat treating system and we’re looking into the possibility of robotic grinding,” Smeltzer said. “From a molding standpoint, I think we’re set for several years.”

(Modern Casting, August 2003, A Publication of the American Foundry Society)

For general inquiries please complete the form below.